Smartphone apps aren’t just making life easier - they’re improving the quality of it as well. From attending classes to downloading and sharing medical test results, people are using their smartphones for the more important aspects of their lives, not just buying airline tickets or ordering dinner. Financial services are no different. Most expect the same reliability from their banks that they’re getting everywhere else. Customer retention depends on it, so why should a bank try to adapt to this reality on top of rigid legacy systems?

It’s quicker on the cloud.

Speed and adroitness shouldn’t be adjectives reserved for fintechs and startups. And these spry new competitors shouldn't be a source of anxiety for banks either. They’re bringing the banking sector a huge opportunity to lead players of all sizes into a bright digital banking age.

Change agents. Until recently, fintechs have led the charge to expand the offer of financial services through digital channels across Latin America and the Caribbean, where half of the population has historically been unbanked. Thanks in part to rising smartphone penetration, there are 1,166 fintechs operating across the region and growing, according to the Inter-American Development Bank.

The pandemic has only hastened trends in this area, with more and more people stuck at home buying goods and services provided by fintechs all from their phones. Plus governments have used digital accounts as conduits to distribute stimulus aid to offset the economic lockdowns.

According to research conducted by Americas Market Intelligence in partnership with Mastercard, 40 million people in Latin America became banked in a five-month period ending in October 2020 thanks in large part to new digital offerings.

On the surface, it would appear that incumbent banks may be threatened by the rise of the nimble new competitors. In fact, a look at market-share numbers today understandably stokes such fears. According to The Economist, conventional banks as of October 2020 accounted for 72% of the total market value of the global banking and payments industry, down from 81% at the start of that year and 96% a decade ago.

Fortunately, there’s good news for banks during all this disruption. Those who embrace change can fare better, possibly even emerge as leaders.

Leadership opportunity. Many traditional banks are doing very well in this new environment by being innovative themselves. A few have spun off wholly-owned digital subsidiaries known as speedboats, which are as nimble as the most vanguard of fintech startups by operating technologically independent from their parent companies while offering key services such as payments.

Others are acquiring fintechs outright, as traditional banks recognize the need to adapt. A recent survey of 105 banking executives in six Latin American countries conducted by The Economist in conjunction with Mambu found that digital transformation strategies in traditional banks are well underway: 98% of banking executives said their organizations have a digital transformation strategy, and 50% categorized the implementation of this strategy as advanced.

Moreover, the survey found that even though fintechs are forcing traditional banks to rethink how they deliver financial services (87% of banks responded as such), most incumbents also viewed their newer counterparts as partners rather than outright competitors.

Interestingly, 52.9% of respondents viewed e-money and digital wallet providers as partners, while only 22.5% viewed them as competitors.

When needs grow more complex, fintech clients can demand services from traditional banks. Many digital lenders are not protected by deposit insurance, for example, which limits their potential to grow and the products they offer, at least for some.

Therefore, larger banks shouldn’t view new technology as a threat but rather as a new tool to leverage decades or even centuries of experience managing and growing financial services.

Will your end customer care whether you’ve gone to the cloud? Not at all. But they do care if you can’t keep up with competitors they feel offer newer and more readily available products elsewhere on their smartphone screens. Markets change and products change, though customers won’t change provided a bank remains flexible, open and agile. 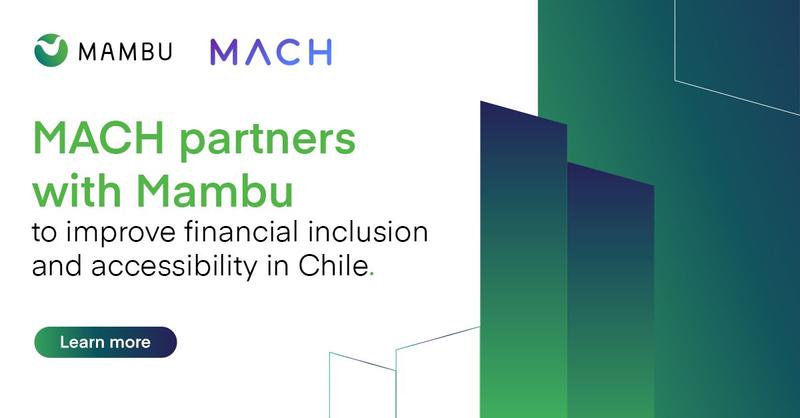 MACH partners with Mambu to improve financial inclusion and accessibility

MACH has chosen Mambu to support its vision of continued growth in an effort to provide all Chileans with reliable, digital financial tools that open the door to the world.