Skip to content
3 min read
According to a new report, social responsibility and ethical practices among top priorities for next generation of Islamic banking customers but a lack of digital services is holding the industry back.

More than half of young Islamic finance customers would adopt Islamic banking if it were more accessible, according to a report from cloud banking platform Mambu.

The ‘Faith and finance: The changing face of Islamic banking’ report, which surveyed 2,000 millennial and Gen Z consumers globally, illustrates the growing appeal of Islamic finance services around the world, as over half (53%) of young Muslims said they would choose Islamic banking - if barriers to entry were removed.

This reflects a wider demand for ethical banking services in the wake of COVID-19, as consumers seek to make more sustainable and socially conscious choices post-pandemic.

According to Mambu’s research, 74% of young Muslims said they want banks to make investments that align with their religious beliefs, while 75% want them to make investments that ‘do good in the world’. More specifically, almost two thirds (62%) were opposed to their bank lending to tobacco companies, and 69% would rather their banks not lend to gambling institutions. 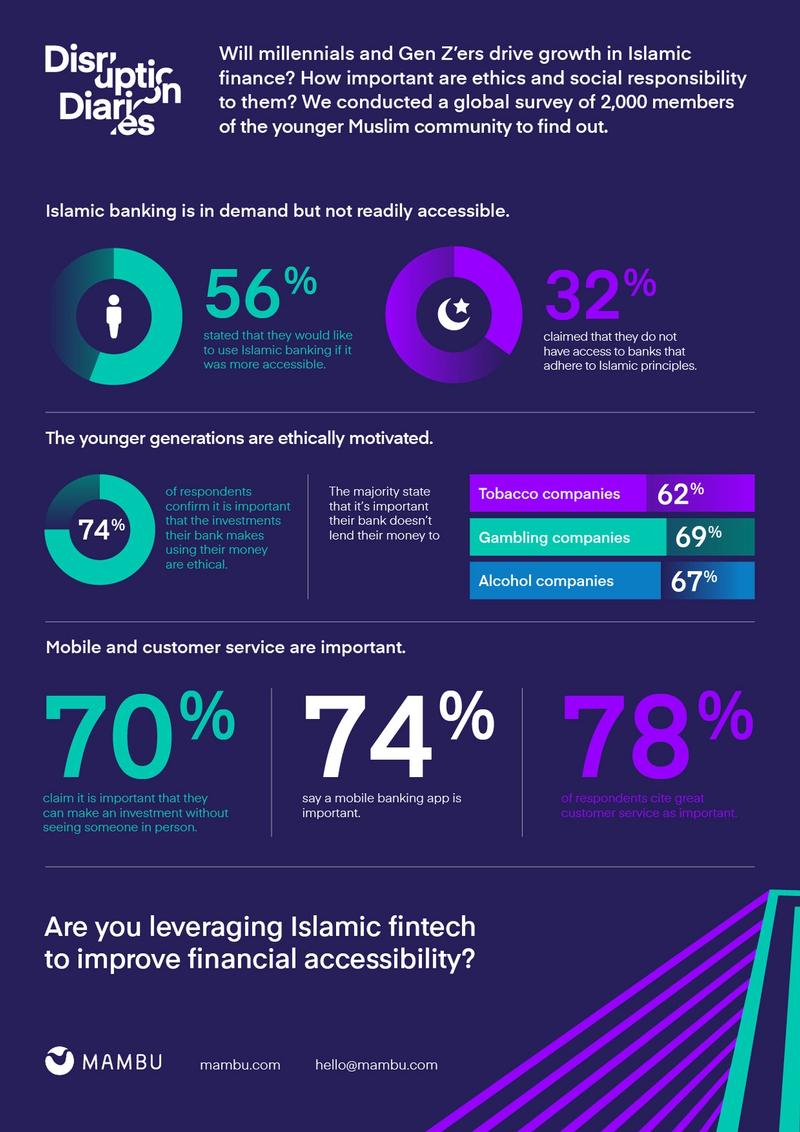 “With 1.9 billion Muslims underserved globally, it’s clear that there’s a huge opportunity for both Islamic and conventional banks, alike, to provide compliant solutions for the modern consumer.”

The Islamic finance market is growing rapidly. Total assets in the sector have exceeded $2 trillion in recent years and are expected to reach $3.8 trillion by 2023. But a lack of digital services could be a major barrier to service uptake among the next generation of consumers.

Miljan Stamenkovic, General Manager MENA at Mambu, said: “This is a generation that's technologically savvy and more globally mobile than the generations before them. They want banking services that align with their lifestyle and values, without compromising on flexibility or ease of use.”

“The Islamic banking industry is only around 40 years old and has already proven to be tremendously successful - a showcase for the ethical banking opportunity. But with younger generations set to account for three quarters of all Islamic banking revenue by 2023, the industry must listen to the demands of these digital natives, both in the Middle East and beyond, if it wants to stay ahead of the curve.”

Islamic banking is not only growing in the Middle East. There has been an explosion of Islamic fintechs globally over the last few years, with this market expected to be worth $125 billion by 2025.

The United Kingdom currently leads with the most Islamic fintechs, a total of 27 companies, followed by Malaysia with 19 companies, and the United Arab Emirates (UAE) with at least 15 companies.

The Islamic finance industry is built on a promise that products and services comply with Shariah law. It was founded on a set of moral and ethical principles that promote the public good and the belief that ‘money shouldn’t make money’ – a financial system that is interest free.

The full report on Islamic banking can be found here.